On October 8, 2012, HuffPost Live, the new video streaming network from The Huffington Post, produced a segment on "Hoarding's Harsh Reality." Hosted by Alicia Menendez, the segment featured Frances Boudreaux (author and daughter of a hoarder), Sidney Patrick (blogger and advocate for children of hoarders), and Randy O. Frost (professor of psychology and hoarding researcher). 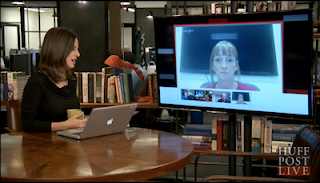 While the segment began with a general description of hoarding as a disorder, most of the discussion centered around the impact of hoarding on families and children. I think many children of hoarders will find both Ms. Boudreaux and Ms. Patrick to be refreshing and empowering voices. They really did a terrific job of conveying the challenges faced by children of hoarders and other family members.

Other children of hoarders contributed interesting thoughts in the segment's comments section, but, as is typical for internet comment sections, one or two miscreants shared their ignorance, showing that much more work needs to be done to increase awareness of the impact of hoarding on families.

PS. You can buy Frances Boudreaux's book, Where the Sun Don't Shine and the Shadows Don't Play, through Amazon and other booksellers, and you can read Sidney Patrick's blog at My Mother In Law is Still Sitting Between Us.
Posted by Hoarder's Son at 11:39 PM No comments:

There is a house in my neighborhood that is an obvious hoard house.

Now and then, I see a girl, probably around thirteen years old, riding a Razor® scooter up and down the driveway, over and over. I've never seen her ride it on the sidewalk or in the street. She always has such a forlorn look on her face.

I haven't stopped to say hello to her (cue visions of breathless reports on the evening news about a 40-something year old stranger approaching a 13 year old girl in her driveway), but every time I see her, I want to tell her that she isn't alone and that things can get better.

I think I'm going to print out a Children Of Hoarders, Inc. flyer (downloadable as a 470 kB PDF file) and put it in the family's mailbox. Better yet, I should just print up a few to carry in my car, and when I see a kid in such a situation, I shouldn't be afraid to get out of the car, hand a flyer to the kid, and tell them that they are not alone.

Then again, the flyer is written more for an adult than for a teenager. Thoughts?


I'm guessing that if I ever sign up for an online dating site, this line won't exactly reel 'em in:

"I'm in my forties, I'm fairly accomplished, and, deep inside, I still struggle with feeling like I'm worth less than a dust bunny."

There. I said it.

Tonight, I found myself writing the "dust bunny" sentence in response to a remark someone made about the deep, lasting impact of growing up in an environment where parents appear to value stuff—even stuff that belongs in a biohazard container—more than they value the psychological and physical needs of their children.

I know that I am worth more than a dust bunny.

I just don't always believe it.

After all, I spent just under half of my life surrounded by evidence that I wasn't.

A big part of the struggle is recognizing that the scar is real, that it is significant, and that I am not being a weak, whiny little kid by acknowledging that the sustained conditions of my first eighteen or so years will naturally echo across the decades.

At the same time, a part of me tells me that I'm in my forties, and it's weak and whiny to blame things that happened more than twenty years ago for how I feel today.

Meanwhile, another part of me insists that I grew up surrounded by cobwebs and cat feces, and that I have a hell of a lot of nerve to think that I deserve better than that. If there is anything truly evil in my life, it is that voice, and I speak with it every day.

PS. Before anyone gets too concerned about schizophrenia, I don't actually "hear voices," or anything like that. I just tend to have melodramatic internal dialogues. :)
Posted by Hoarder's Son at 1:32 AM 9 comments: